Why worship Jehovah...?
... because He assigns sin to its true source
The Kingdom of The Heavens

The righteous one cares for the soul of his domestic animal, but cruel are the mercies of the wicked ones.


How descriptive the gospels are about the Kingdom! It is a treasure worthy keeping safe [Matthew 13:44], the greatest object of desire [Matthew 13:45-46], something which cannot be contained [Matthew 13:33], and a kind act designed to rescue good and bad [Matthew 13:47] and to make creation flourish [Matthew 13:24]. Our Lord makes it so attractive!


Contrast that with what is preached today: a God Whose Good Name will be justified by a sudden slaughter, Whose right to rule will be proven by power rather than beauty.


So completely different! they can’t both be right – yet the same scriptures are used to justify both. The difference in interpretation is all a question of timing…

Prophecies of End Times
Let’s place all of the “end-time” prophecies together and see how they interact.


Jesus spoke of earthquakes, wars and famines preceding “the disgusting thing standing where it ought not” and the “great tribulation” [Matthew 24:6,7,8,13]. Paul wrote of the talk of “Peace and Security!” as a foolish presumption prior to destruction [1st to the Thessalonians 5:1-5]. And the apostle John wrote Christ’s Revelation.


Ot these, Jesus’ warnings quoted Daniel and warned of what would happen to the nation of Israel. This was the basis of the 1st century ministry: to preach the recently executed Christ as a saviour – especially concerning his warning for Jerusalem – and thereby save friends, extended family, and other lovers of God from the provoked wrath of the Romans. The obstinate ones who favoured tradition over God’s Messiah were the ones shouting Paul’s “Peace and Security!” at these preachers – only to suffer the greatest tribulation the world had ever seen: the annihilation of God’s Own established centre of worship.


Nevertheless, these prophecies – though fulfilled – concern a destruction and have gained popular association with an imminent Armageddon. So do they combine?

Timelines
If we adopt the timeline as preached today, we find ourselves within the events of Revelation. Some churches give a date of 1914 as their beginning, others a little earlier or later, but each expects the imminent war of Armageddon where God will save His chosen ones from everyone else.


If we look at Revelation, the first earthly event of the vision is a unanimous appreciation from everyone on earth and in Heaven:

And I heard every creature that is in heaven and on earth and beneath the earth and on the sea, and all the things in them, saying:
“To the One sitting on the throne and to the Lamb be the praise and the honour and the glory and the might forever and ever.”


This occurs shortly after Christ is given a special scroll – the one authorising the removal of badness in the world. In short, this cry of appreciation is at Christ’s coronation as King of kings, after earth’s rulers have asked for God’s help.


We are still awaiting this first event – it hasn’t yet happened – so Armageddon cannot be the next big event. 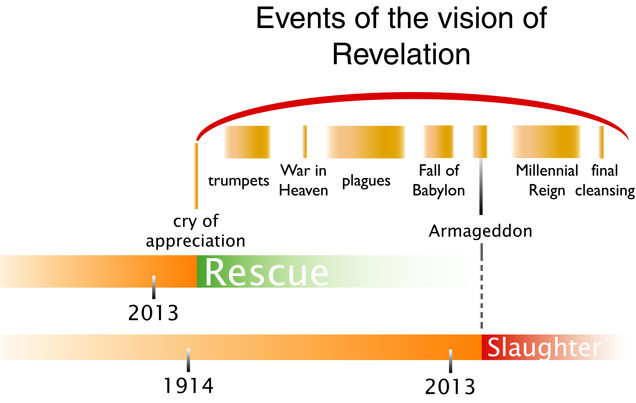 These two conflicting timelines show how the scriptures have been misinterpreted for centuries: the difference between God being seen as kind and benevolent – or as bringing violence on an unsuspecting world.


This skewed timeline is a tool of the adversary, who – by attacking the Christian Way early – has been able to misrepresent God as cruel and a hindrance, in the same way he lied to Eve. Choose one and God is benevolent - the Father catching the Prodigal Son Mankind on its return; choose the other and God is unjust, a slaughterer of people - many of whom are genuinely innocent and sincere. Centuries of worshippers have lived in terror, all because of this lie, and forced to twist their hearts into believing that slaughter is somehow a loving aspect of God.

Wages
But now that this lie has been exposed – now that churches and religions can trace their own misdemeanours to that devilish misguidance nearly 1,900 years ago – it is time for ordinary lovers of God to receive the news.


Millions of people have shown real loyalty to their church – and thousands of churches have been extremely supportive of their congregations; the people upheld their churches beliefs, and the
The time line determines the fundamental issue: whether God is benevolent, or brutal
churches supported them with prayers and encouragement when difficult circumstances made them doubt the oversight of God. Now it is time for the churches to pay those loyal workers their wages – the truth which releases them from fear of a sudden slaughter, and from the impossible burden of trying to shoe-horn that slaughter into the model of a loving God. Jehovah commanded Moses with the words:


“You must not swear in My Name to a lie, so that you do profane the Name of your God. I am Jehovah. You must not defraud your fellow, and you must not rob. The wages of a hired labourer should not stay all night with you until morning.”


And Moses expressed this, amplified with feeling, to God’s people, as:


“You must not defraud a hired labourer...in his day you should give him his wages, and the sun should not set upon them, because he is in trouble and is lifting up his soul to his wages; that he may not cry out to Jehovah against you, and it must become sin on your part.”


Whatever people’s church, religion, beliefs – these loyal lovers of God are entitled to their wages. These wages of truth will cleanse every church from the stain of that terrible lie with which the adversary so cruelly depicted God as unfathomably brutal – and instead give each the potential to be a beacon in the world for God’s beauty and kindness. In all things, it is not ourselves or a church or religion or even beliefs which we represent – but God. So, now knowing the simplicity of His purpose, let us – misguided as Samaritans as we may have been – be delighted to represent Him in spirit and in truth [John 4:24].

Who Makes the Call?

A Legal Precedent?
“We are alien residents before You [Jehovah] - settlers the same as all our forefathers. Our days are upon the earth are like a shadow and there is no hope [of anything without You].”


It was reported this week that a man from Kiribati has claimed refugee status in New Zealand, on the grounds that climate change makes a return to his island home dangerous.


It is a sign of our times when something so clear and irrefutable as the climate crisis becomes a factor in a legal case. Kiribati - along with other low-lying Island nations - has long compiled an evacuation programme

for when sea-level rises make their nations uninhabitable. Kiribate itself has engaged in negotiations with Fiji to purchase some 23 square miles of land to re-home some of its inhabitants, should the terrible day arrive.


However, were this individual legal case to be successful, it would become a precedent for hundreds of thousands of people of many nations to claim refugee status in New Zealand and other nations - a migration which they might be unable to handle. Central Europe has long been concerned over the predicted mass migration of hundreds of millions from India, Pakistan, Bengal and even China due to the adverse effects of the climate crisis.


While famine and floods and droughts and climate changes will cause direct problems - enough to bring down whole societies - this is one more worrying sign that even safer countries are ill-equipped to deal with the consequences of the crisis. Thankfully, the benevolent God does not expect us to cope - and His Divine Rescue will be just the start of a kinder, easier, and safer life for us all.